Given the opportunity, that hog would eat that cat. And that butcher. Whole. And, fast. Also, the chicken is the hog’s natural enemy. Hogs kill and eat chickens without thinking twice about it. For some reason they really hate chickens. So, that part of the image with the chicken nestled up next to the hog’s throat is sort of a metaphor for an evolved peace; an enlightened community looking back on their last two unevolved brethren.

They all have looks of concern. And, they look indignant rather than angry. Except the hog. Painted the same color red as the cat’s food bowl, the hog is nonplussed. He’s wearing a half smile as if he’s thinking, “yeah, I get it, you can use that tool in your hand to render one of us tasty creatures. And, I’d do it, too if I was that human’s pet over there instead of merely one of his meat-machine assets over here.”

It might be inadvertent, but the artist, Pawel Kuczynski has created a bridge of non-dualism with his red hog and red food bowl. That connection reminds us that even if we want to pretend we’re a member of the enlightened crowd on the right, we’re only separate from the butcher and the predator in our minds. In reality, we’re all individual components of the same system even if we prefer to pretend we are not. 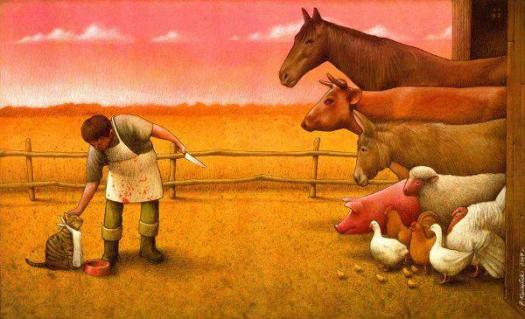